On Sunday, I stopped by the Leaside Gardens for their new monthly card show. I live in downtown Toronto, and Leaside Gardens is in East York, which is just east of the downtown core. I don't head out that way often, but I went last month for the first card show that's been held at that arena in a long time.

The first show wasn't very busy and dealers packed up early. The same thing happened this time, as I prefer to come later in the day (it was a Sunday, after all). But I felt the show was a bit busier this time.

I'm not generally a fan of card shows, as the selection is usually repetitive and the cards overpriced. If you've seen the recent documentary about baseball card collecting called Jack of all Trades, there is a scene where a group of people go to a card show for the first time since the early nineties and find a disappointing scene compared to what it used to be. I feel that way, too, as I think the hobby has long moved past cards shows, LCSs, Beckett Magazine, and these sort of things (the same thing has happened with stores that sell movies, CDs, and is now happening to video games). But it's still interesting to see that many trading cards in one place.

I also didn't want to leave empty handed, so I picked up a few things I wanted without spending too much. I'll spread these pickups out over a few posts. 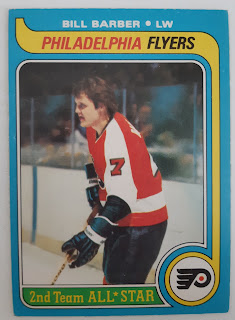 First, I grabbed a small stack of 79 OPC. I already have the Gretzky rookie, graded as a PSA 1. I've been wanting to build a vintage hockey set, as I have never completed one, and considering I already have by far the most expensive card from that set out of the way, I figured 79 OPC was a good place to start.

The cards I grabbed were only 25-cents apiece, but are not in the greatest condition. Honestly, sometimes I feel like someone who is condition sensitive about vintage, and sometimes I feel like I just don't care. I feel like the less you care, the less money you spend since you're willing to buy things other collectors pass on, and you end up having more fun that way. But, your collection isn't as sharp looking. 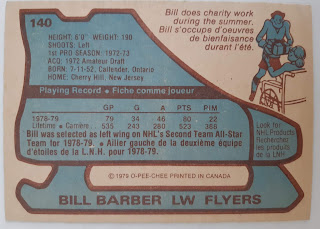 In the end, I think eye appeal is more important to me than standard condition. For example, I think this Bill Barber card was a good deal for only a quarter. Barber is a HOFer and the card is in nice shape. 79 OPC is a difficult one for conditioning because the blue borders make it easy to notice damage to the edges and corners. But this is a nice example and I think a good pickup for that cheap.

The back of the card notes that Bill does charity work during the summer. That's probably the case for a lot of players, so this wasn't the most notable cartoons. One of the things I love about vintage are the cartoon backs. They're like Bazooka Joe comics. It's one of the small touches that is missed among most modern cards, and reasons why I enjoy Topps sets like Ginter and Heritage. 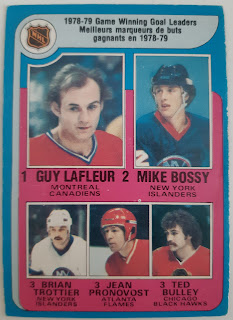 Another card I picked up was the game winning goals leader card, which featured Guy Lafleur, Mike Bossy, Bryan Trottier, Jean Pronovost, and Ted Bulley. That's three HOFers for a quarter. I don't think you can get a better deal than that. League Leaders cards in hockey and baseball always go for a better deal than cards featuring just one player alone, unless it's an exemplary player like Gretzky or Orr. 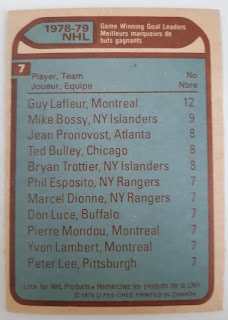 This one is in good shape, too, although the right edge and bottom right corner aren't great. I'm also not overly familiar with Ted Bulley. Looking at the card back, Lafleur was way ahead of everyone else in game winners that year, with Bossy coming in second, and the rest of the guys on this card tied at third. Many others were tied at fourth. I think game winners are a bit of a fluke stat, as it seems that guys who are going to lead in that category are going to be guys who score a lot of goals for teams that win consistently, or guys who are the only real goal scorer on a weaker team. I mean, Bulley, Don Luce, Pierre Mondou, and Peter Lee are not players who would otherwise be leading the NHL in any category. I've never even heard of Lee. 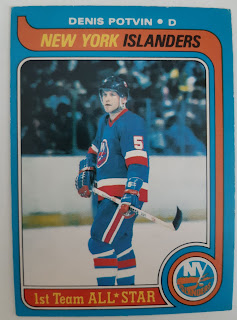 The next card for a quarter was Denis Potvin, another HOFer and seventies hockey icon. Like the Barber card, the front of this card notes that Potvin made the first all-star team (the second team in Barber's case). These aren't separate all-star cards for these players, but just a design choice by OPC for the primary cards of players who made the all-star squads. This card is in decent shape, too, with good centering. 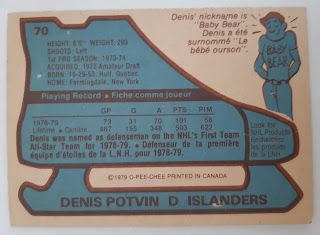 The back of the card notes that Potvin's nickname is Baby Bear. Well, everyone knows that, so I don't know if it's really trivia. He had a great year in 78-79, though, scoring 101 points in 73 games. Not too many defensemen that can accomplish that these days. 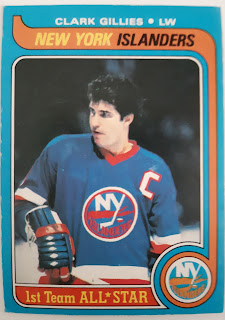 The next card I grabbed is another HOFer and first team all-star card in Clark Gillies. This is a nice photo of Gillies showing off the massive captain's "C" on the front of his Islanders jersey. I feel like Gillies is one of the weaker HOFers, kind of like Barber. I often feel like the standards for players getting into the HHOF is much lower than one would think. Perhaps I'm wrong, but I know people have criticized the HHOF as being moreso the "Hall of Very Good" based on many of the players they've admitted. 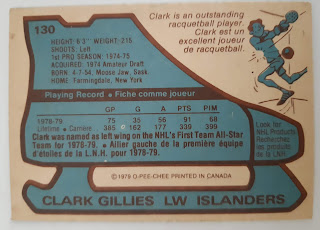 Those were the four OPC cards I picked up for $1. I'll likely end up buying a big stack of them off Sportlots at some point, which won't be too much more expensive, even including shipping and the exchange rate.

What's your all time favourite cartoon from a card back?
- August 13, 2019
Email ThisBlogThis!Share to TwitterShare to FacebookShare to Pinterest